The Street Sweeper, by Elliot Perlman

Today author Elliot Perlman joins us on the Chunkster Challenge blog with a special guest post. Vasilly and I are thrilled to have him here - and we hope you will enjoy this feature which gives wonderful insight into the inspiration for his latest novel and the process of writing a book of this length. First a little about Mr. Perlman:

Elliot Perlman was born in Australia. He is the author of the short-story collection The Reasons I Won't Be Coming, which won the Betty Trask Award (UK) and the Fellowship of Australian Writers Book of the Year Award. He is also the author of two previous novels: Three Dollars (1998, and Seven Types of Ambiguity (2003) which was shortlisted for the 2004 Commonwealth Writers Prize (Best Book), the 2004 Queensland Premier's Literary Awards (Best Fiction Book), and 2004 The Miles Franklin Award.

Many thanks to Mr. Perlman for taking the time to craft a guest post for us! 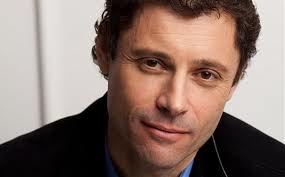 I used to catch the bus at a stop outside the hospital and see the hive of activity and the interaction of seemingly disparate people of different ages, socio-economic groups and educational levels, people of different races, ethnicities and nationalities, all milling around each other. So stressed were the visitors and many of the staff that they chain-smoked to alleviate their stress out on the street besides patients in wheelchairs.

To a writer observing this scene, the multitude of smokers outside the cancer hospital, people of all different backgrounds forming an instant but transient community, all of this is the gold that sends one off in search of the goldmine that is the answer to the question, “What if an unlikely friendship was to blossom out of all of this?”

From here came the answer that was the seed for The Street Sweeper. We see the beginning of an unlikely relationship between two men who, statistically should never have met. One of them is an African American janitor, a wrongly-convicted recently released ex-con, the first ex-con to be put on six month probation in a pilot program to help ex-cons re-integrate into society, a man desperate to keep his job, find his young daughter and get his life back on track. The other is an old white man battling cancer, a Jew in his eighties with only wisps of hair and thick European-accented English, a Holocaust survivor. He’s a survivor of the Auschwitz-Birkenau death camp and even rarer than that, he was a member of the Sonderkommando, those Auschwitz prisoners forced by the Nazis on pain of death to work in the gas chambers and crematoria.

In a 21st century survival story these two men will need each other in ways neither of them could ever have imagined. And this is only the very beginning.

I often get asked where the beginning comes from and if I know at the beginning how long the book will be or how long it’s going to take me to write it. Perhaps it’s a mistake on my part but when starting one of my books I don’t really think very much at all about the length. Somehow, and it happens variously, I get the idea for a story, what you might call a plot outline, and I start making notes. I might start doing some research. I’ll read something, hear something, go somewhere and watch people, interview someone and then the plot really starts to take shape. Nowhere in any of this do I start thinking about length. Given the length of my most recent two books, you’d think I would have (or at least I should have) given some specific thought to the question of length. Seven Types of Ambiguity took me almost 4 years to write and I think it weighs in at about 230,000 words. The Street Sweeper is a bit shorter but took longer, in large part because The Street Sweeper required more research than my 3 previous books put together.

The Street Sweeper took about 5 ½ years to write. In addition to all the reading that I had to do for it there were the interviews. I interviewed people all over New York; historians at Columbia, ex-cons, social workers, lawyers. Then the story took me to Chicago, specifically to the Illinois Institute of Technology where David Boder, the inspiration for my character, the academic psychologist Henry Border, had taught and researched. Then I interviewed former students of his enrolled then in his masters program working on the “Adjective- Verb Quotient”. Then I went to the all-important South Side of Chicago to see where the meat works were and where my African American Chicagoans lived. I had the good fortune to be shown around there by a charming African American gentleman then in his 80s who was able to tell me about life in that time at that place. I interviewed people in my hometown, Melbourne, Australia. Then of course there were my trips to Poland and particularly the 6 trips to Auschwitz. I found a guide at the Auschwitz State Museum who went from being a trusted guide to a friend and confidant. To him I confided the wartime plot. He gave me great encouragement urging me to tell this story. Not only that but he introduced me to the last surviving Polish Jewish member of the Sonderkommando. It was this man’s wartime experiences that became the basis for my character, Henryk Mandelbrot, the Holocaust survivor in the New York hospital who befriends the African American ex-con.

I knew it wouldn’t be a short book but that didn’t bother me or faze me in any way. As a reader I’ve enjoyed works of all lengths but so many of the books that influenced me, as a writer and perhaps even as a person were, now that you force me to consider it, long books. As a young man I was a devotee of much 19th Century fiction; Dickens, George Eliot, Thomas Hardy, Victor Hugo, Emile Zola and the Russians of course. Even when I moved into the 20th century, many of my favourite books were long ones; Vasily Grossman’s Life and Fate and Robert Musil’s, The Man Without Qualities. It’s such an incredible comfort to discover a new favourite writer or a long book in which you just want to lose yourself, to immerse yourself. Whatever else is going on in your life, you know the book is there waiting for you with characters you already know and about whom you want to know more. But to be honest, I’ve also read a lot of short stories and poetry of various lengths and one of my books, The Reasons I Won’t Be Coming, is a collection of short stories so I don’t think I’m fixated on length. I have to admit though that one of the short stories in The Reasons I Won’t Be Coming, the last one called, “A Tale in Two Cities”, is about 100 pages. That’s probably quite long for a short story. Now you’ve got me thinking!